Topsoil in Melbourne is heavily dependent on the underlying geological material, if there has not been a history of topsoil ameliorations or importation of topsoil from other locations. According to the Department of Agriculture, topsoils of Melbourne can be divided into 9 distinct types. In some parts of Melbourne, the importation of topsoil will be a bigger factor than the geographic and climatic range. Knowing the type of your natural topsoil can help you save money when deciding on what topsoil amelioration is required. Some Melbourne clay topsoils will benefit greatly with the addition of gypsum, but for others the only benefit of gypsum will be the addition of calcium to the soil.

Sporting grounds, in particular, will normally have a thick layer of imported friable topsoil so if your garden is built on one of the closed Melbourne racetracks like Richmond, Cheltenham or Braeside your topsoil could be different to your neighbour across the street.

Topsoil is the layer of soil just below the surface layers. The surface layers are the layers containing the litter of plant residues as well as accumulated organic matter with some mineral soil and most of the soil life. 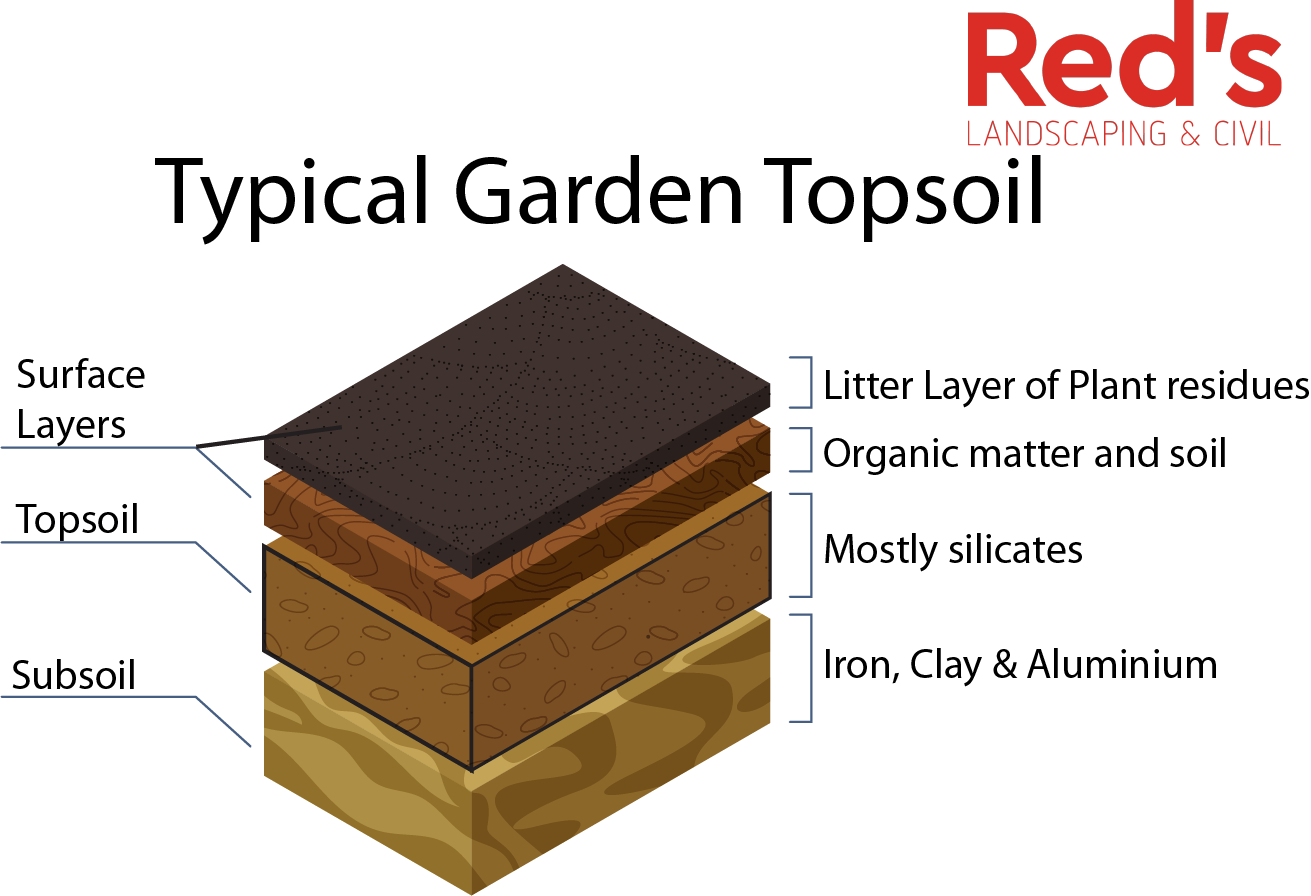 This could be the best natural topsoil in the whole of Melbourne as they are well structured deep and friable. These topsoils can be mildly acidic like most topsoils in hilly wooded ranges. They can be a little poor in plant nutrients, so regular amelioration with organic matter will be of great benefit to the soil. On lawn areas a light annual application of garden lime will help. Farmers know that red earth is great for farming.

The red loam topsoil will mostly be found to the East of Melbourne in the upper Dandenong ranges and in the hills between Monbulk and Silvan. This type of topsoil will normally suit a wide range of plants as is has excellent drainage, and a good soil structure for plant root development. 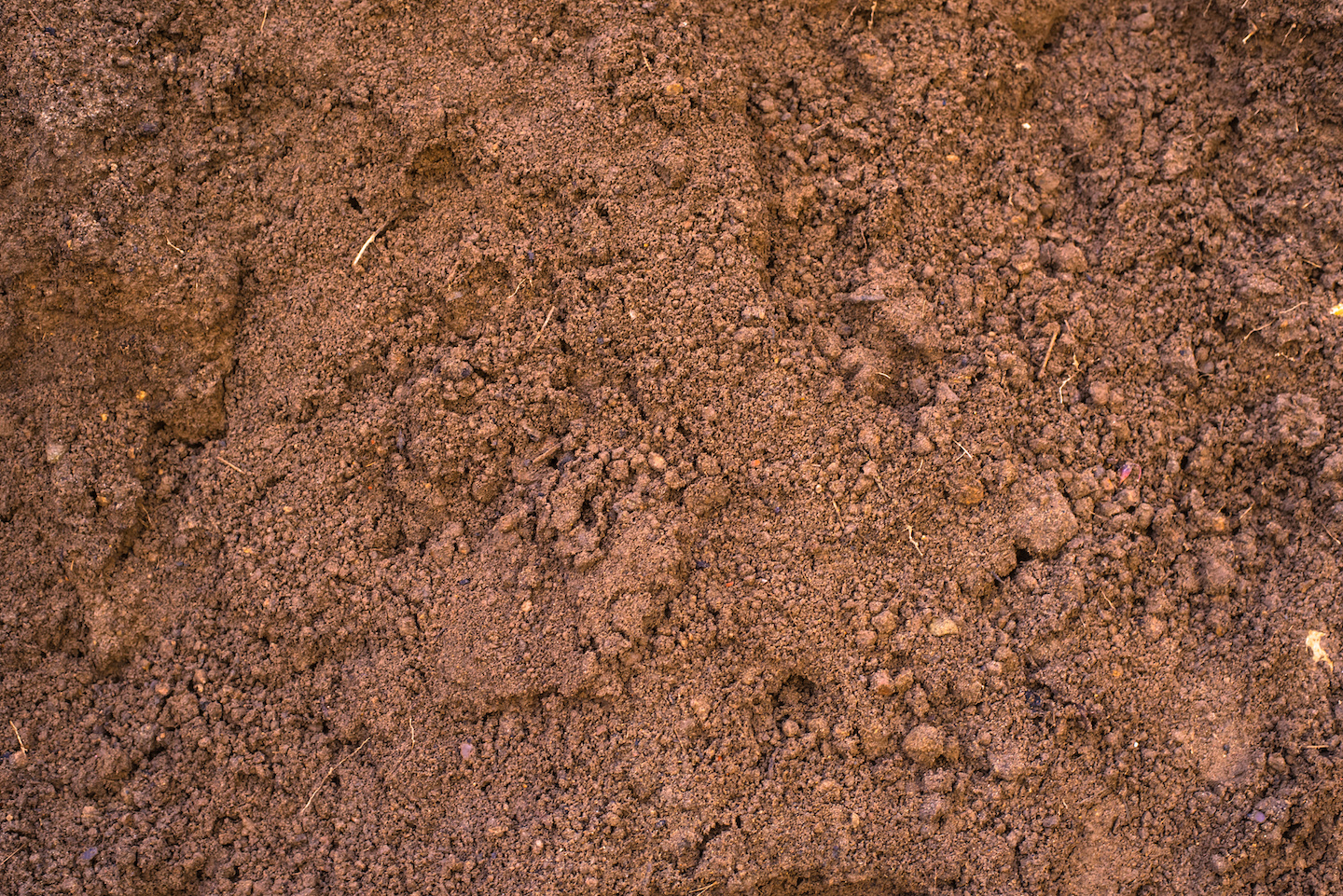 These topsoils formed over the older basalts on the southern Mornington Peninsula. This is the brown-grey loamy friable topsoil naturally occurring in places between Main Ridge and Flinders. For best results in your garden, ameliorate with manure and organic matter. Take care not to cultivate too deep and bring the clay to the surface. 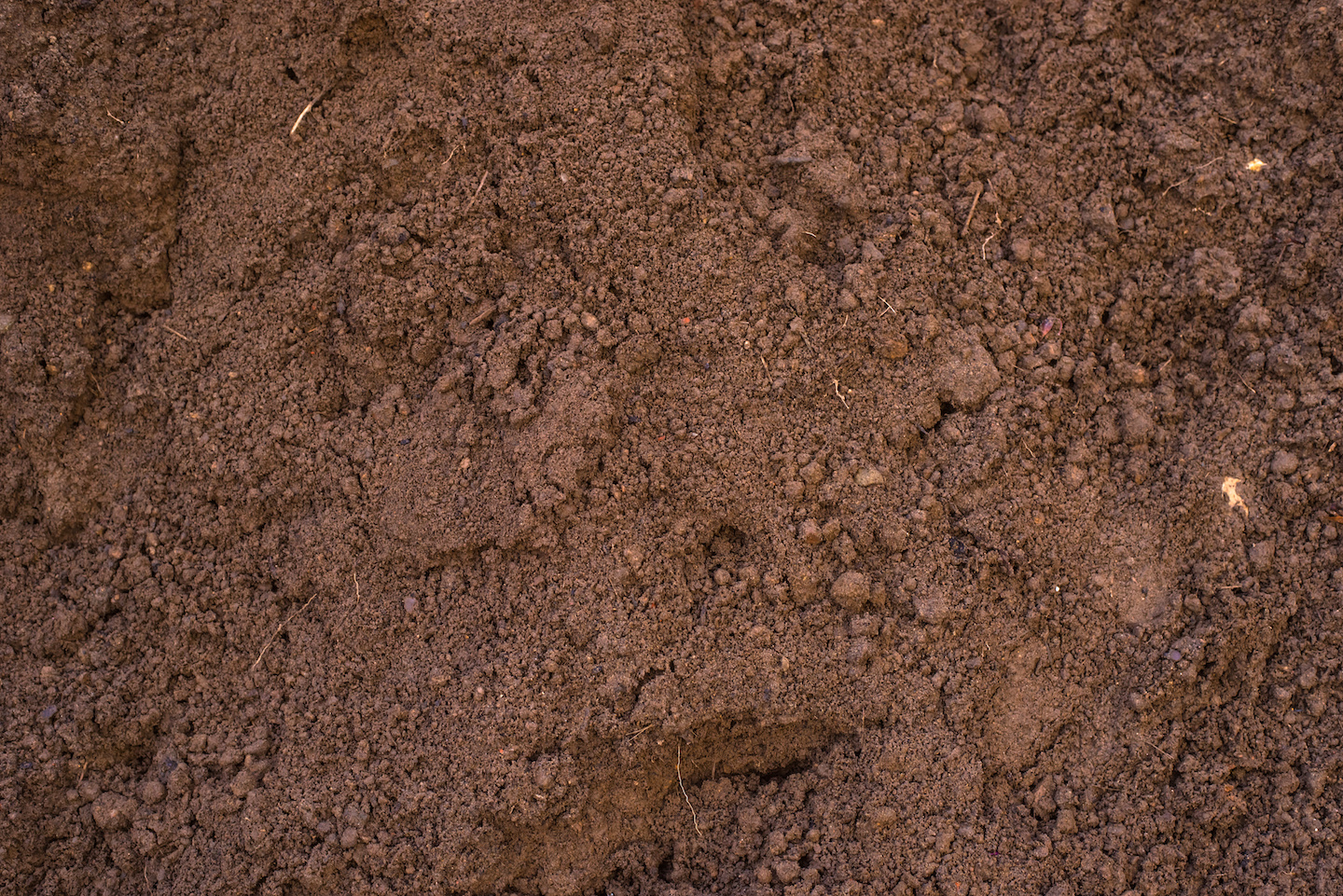 These topsoils are found over a large part of Melbourne. The flat and undulating land between Kew and Mount Waverley as well as deeper topsoils in Tyabb, Balnarring Frankston and Mornington. This topsoil is also over a huge part of the Melbourne suburbs within a triangle from Dandenong to Cheltenham and over to Toorak. After long periods of heavy rainfall, a watertable may occur over the clays. It is important for Melbourne Landscapers to take drainage into account when landscaping on these soils. As with other Melbourne loam over clay soils, ameliorate with manure and organic matter. Take care not to cultivate too deep and bring the clay to the surface.

A light grey loam with some gravel and small stones found in the suburbs to the North East of Melbourne. These soils will be found around a strip from Rowville to Bundoora and from Croydon to Kew. At the boundary of the topsoil and clay layers large angular stones occur which makes digging drainage difficult for residential landscapers. Generally, these soils are deficient in humus and nutrients. Melbourne landscapers should dig in organic matter and manures to ameliorate these soils. As the clays here are generally reactive, an application of gypsum can help drainage and soil structure. A small amount of garden lime can be added to correct acidity.

Topsoils formed over parent granite at Mount Martha and Arthurs Seat on the Mornington Peninsula as well as Hallam, Lysterfield and a few other places. The sandy loam is generally ok for drainage but has poor water holding capacity. The abrupt transition between the sandy loam and the mottled yellow brown and grey clay can lead to water logging on lower slopes in winter and spring.

If this is the case, landscapers should consider subsoil drainage systems. As the soil has poor water holding capacity, landscapers should dig in plenty of organic matter as well as install an irrigation system with a dripper. Generally, this soils are only mildly acidic.

The parts of Melbourne which were previously swampy or flood plains like the Melbourne Suburbs close to the Yarra. These Melbourne suburbs include Banksia Park near Heidelberg and Bulleen. The frequently flooded Yarra floodplain of the lower-middle yarra river and tributaries were once covered in Manna gum, swamp gum and river red gum with swamp paperbark in the wettest areas. These are a mix of topsoils and it can be difficult to draw conclusions on drainage. Landscapers should ameliorate with manure and organic matter.

This is the natural topsoil in coastal gardens between Black Rock and Brighton and along the coast of Port Phillip Bay all the way to Rye. Some of the land previously used for market gardens in Langwarrin and Cranbourne have this soil. These soils are generally very deficient in nutrients, so landscapers should dig in plenty of manure and organic matter to improve the soil. Annual applications of garden lime will help to neutralize the acidity.

The topsoil between Sorrento and Cape Schank in the coastal sand dune areas is a whitish grey sand occasionally over a hard lime base. These soils can be either acidic or alkaline, so if your plants are not thriving a soil PH test may be required. Landscapers should dig in plenty of manure and organic matter as well as install an irrigation dripper system. The coastal plant selection for these soils needs to be particularly salt, wind and lime tolerant.

The suburbs to the west and north-west of Melbourne are well known for their heavy clay soils. This area stretches all the way from Richmond to Broadmeadows and Altona to Thomastown. These soils are characterized by a thin loamy topsoil over dark reddish-brown heavy clays. Often outcrops of the basalt can been seen on the ground surface. The soil structure can be improved with the addition of gypsum and landscapers should dig in plenty of organic matter. For lawns and other gardens sandy loam soil will need to be imported. For the home landscaper, the digging of the requires drainage trenches can be difficult.

For your backyard or frontward lawn, the ground can be sloped a bit more to aid with drainage. Depending on the usage and the makeup of the layers below, you could probably get away with as little as 100 to 150mm of topsoil for your garden lawn. For example green couch Cynodon dactylon, the roots will penetrate the ground up to 1.5 metres deep with much of the root mass at around 600mm deep. For this reason the layer below the top soil needs to be suitable for root growth if you want your lawn to be drought tolerant.

Gypsum is the most widely used calcium additive for garden. If you need gypsum, you can save money by buying it in bulk from your landscape supplier. If the subsoil has a hard clay layer the moisture and the roots might not penetrate or your lawn and you could have poor drainage. Some clays will respond to the addition of gypsum. This will be the case if the clay you have is a flocculant clay. Clays like montmorillonite with high levels of exchangeable sodium will generally be improved by digging in some gypsum. You can perform a simple soil test your clay by putting it in a jar with some pure water, then stirring to create colloidal mix. The mix will appear cloudy.You then add some Epsom salts or gypsum to the mix and watch what happens. If the clay then forms flocculant, or larger, particles that sink to the bottom of the jar leaving a clear layer of water, then your clay is flocculant. Individual clay particles are made up of fine flakes smaller than 0.004 mm. Depending on the type of clay, the fine particles are held tightly together by either weak bonds in the case of kaolinite or stronger bonds if the clay contains positively charged metal ions such as sodium, calcium or potassium. The negatively charged clay particles will repel each other but the individual flakes will bond to each other.

In the heavy flocculant clay topsoils of Melbourne’s western suburbs, gypsum can help to displace sodium and improve the soil structure.

If your garden is near Cape Schank or Sorrento, or if you have a windswept coastal garden, then you might have some soil salinity to contend with. This could also be the case if you are by the sea in Biggera Waters, Runaway Bay or Hollywell and get sea water spray on your lawns and gardens. With saline soil, gypsum will also help as the calcium in the gypsum will remove sodium from the soil.

The disadvantages of gypsum

After an application of gypsum, you should follow up later with slow release fertiliser like Neutrog. Upsurge. Nutrients such as Iron and Manganese can be leached from the soil by the addition of gypsum. Applying excessive gypsum to sandy soils can result in the plants transportation system for zinc, copper and phosphorus being affected.

Agricultural lime may be a combination of calcium and magnesium carbonates if it is made from dolomitic rather than calcitic limestone deposits. Use on acidic soils to increase the PH.

Soil testing kits can be used for simple PH checks of your garden soils. If your plants are not thriving despite all of the care and attention, then samples of your soil can be taken to a laboratory for analysis. 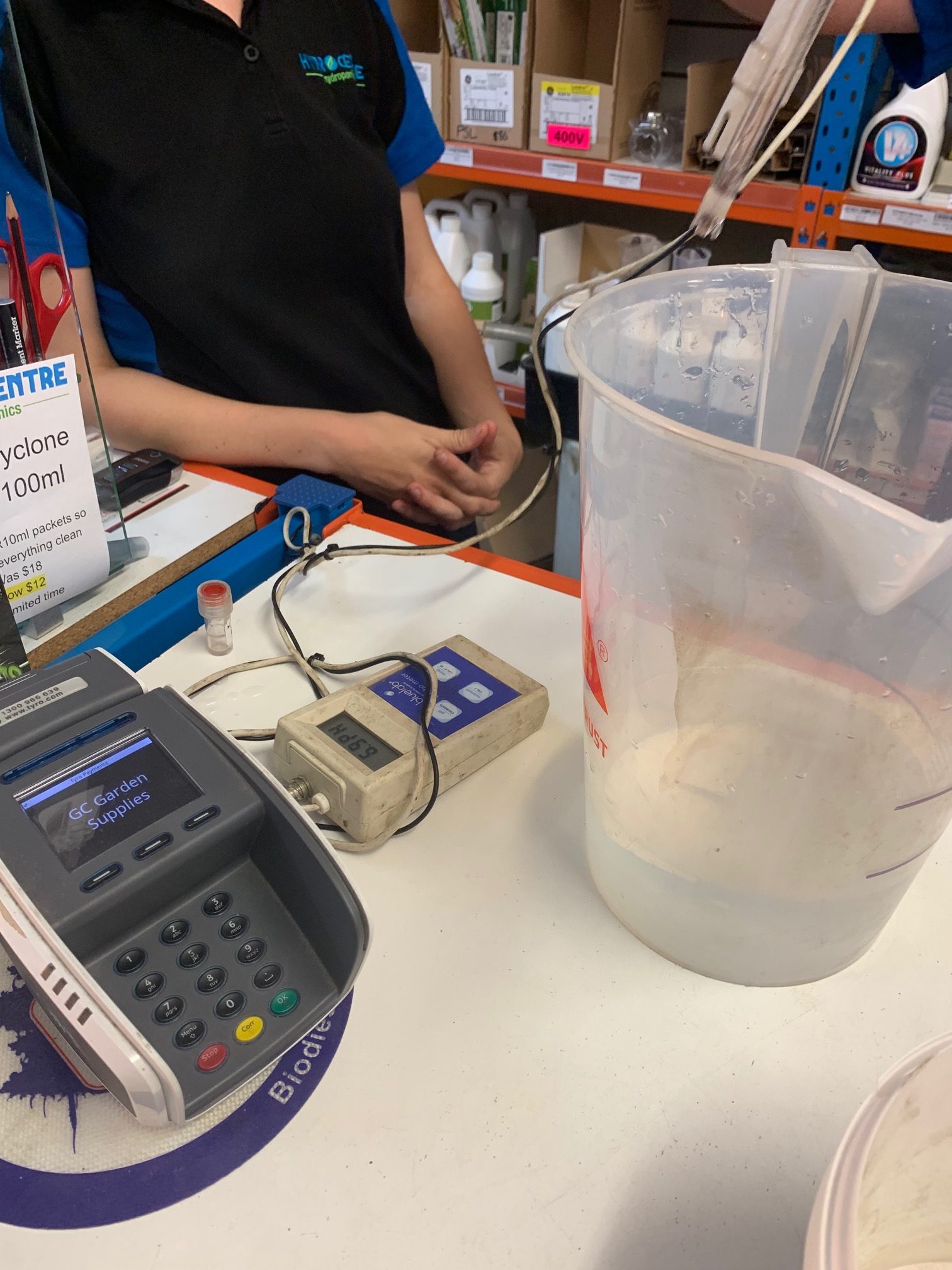 Soils can be tested in a laboratory for salinity or contamination.

When buying landscaping topsoil, always check that you are buying a high-quality product that meets the Australian Standard for topsoil. Soil should also be free of weeds and other contaminants. For lawns, your topsoil needs to be very free draining. The best soil for top dressing lawns is a very sandy soil. For garden beds a little bit of the natural clay soil mixed in will help water retention.

The soil is an indispensable ingredient for the life of humans, animals and ,of course, plants. The soil supplies nutrients and raw materials, storage and filtered water. The soil can degrade harmful chemicals but healthy soil should not be taken for granted. If we allow our soil to be overused, or allow a hard crust to form, then the soil will require amendments to replenish the nutrient store and to make the soil friable. Water will tend to run-off taking some of the soil and nutrients with it.

A healthy soil will contain a great deal of life. Not just microorganisms like bacteria and fungus, but also earthworms. Many of these will form a symbiotic relationship with your plants.

In Melbourne we a lucky enough to have some great resources to improve and maintain the health of your soil. First of all, you should be using a layer of mulch. Mulches such as pea straw and sugar cane mulch will decompose relatively quickly and bring your soil to life. This is especially true when used with an organic fertiliser. If you are after a different look to the sugar cane mulch, you can always use a different mulch over the top. Take care not to mulch up to the truck of trees or shrubs, as this can lead to collar rot. If using a mulch like pea straw, make sure it is weed free. Secondly, consider using a soil tonic to improve your topsoil.

One very important requirement for topsoil for the commercial landscaping of public spaces is the soil cleanliness. Soils use must be free of all hazards and contaminants and also free from any weeds.

Why you should look after topsoils