Concrete is without a doubt it is one of the most widely used materials in landscape construction. From sleeper retaining walls to pavers to post reinforcements to it has a wide range of uses. In this blog we will discuss some of the different types and its uses of in landscape design. To properly decide on which mix to use, it is important to understand what it is and what factors affect its physical properties.

In technical terms, it is a structural material consisting of a hard, chemically inert particulate substance, known as aggregate that is bonded together by cement and water. It is a composite material as it consists of both a binder and a filler. The binder most commonly used is known as Portland Cement. This is a mixture of finely ground limestone (CaCO3) and shale or clay which has been combined together at around 1500℃. In this process, water and carbon dioxide are removed from the mixture (calcination), then calcium silicates are formed. A small amount of gypsum (CaSO4•2(H2O)) is added to regulate the setting.

It is set by a chemical reaction and not by drying. This means that it will even will set under water. It is important to remember this fact during the curing stage. The two main hydration chemical reactions from the calcium silicates are as follows;
Tricalcium silicate + Water—>Calcium silicate hydrate+Calcium hydroxide + heat
2 Ca3SiO5 + 7 H2O —> 3 CaO.2SiO2.4H2O + 3 Ca(OH)2 + 173.6kJ
Dicalcium silicate + Water—>Calcium silicate hydrate + Calcium hydroxide + heat
2 Ca2SiO4 + 5 H2O—> 3 CaO.2SiO2.4H2O + Ca(OH)2 + 58.6 kJ
Both of these reactions are exothermic, that is, they release heat. This heat will dissipate quickly in thin sections. In thicker sections, the internal temperature is transferred to the outside much more slowly. As the outer surface of the concrete will cool much more rapidly than the inner core, there can be a difference in reaction speed. This can lead to tensile stresses that can crack the surface as a result of this uncontrolled temperature difference across the cross section. For this reason, concrete should not be poured in very cold temperatures. In cases where thermal cracking does occur, it will be at early ages of curing. The heat can also cause moisture to evaporate from the surface of the concrete, making it weaker. This will be the case if there is insufficient water for the chemical reaction. For these reason excessively thick sections should be avoided in a single pour. Wooden formwork and damp hessian covers can help the curing process. Giving your concrete a very light spray of water as it is curing will often improve the strength.

It was know to the Romans as “opus caementicium”. Opus meaning a fortification, composition or a piece of work and caementicium meaning quarried or unhewn stone. The Romans developed their recipe in the third century BC. The ingredient the Romans used was volcanic dust known as pozzolana. This volcanic dust included fine particles of alumina and silica which created the chemical reaction enabling the setting. To this they added a mixture of lime or gypsum, brick or rock pieces and water. Usually the mix was a ratio of 1 part of lime for 3 parts of volcanic ash.
Roman builders discovered that adding crushed terracotta to the mortar created a waterproof material which could be then be used with cisterns and other constructions exposed to rain or water. Recently, it has been found that the Roman mix used in seawall construction has better endurance to seawater than the modern stuff. This was mostly due to one of the minerals of the volcanic rock phillipsite, reacting with the seawater to form aluminous tobermorite which reinforced the concrete over time. After the fall of the Roman empire the technology for making concrete was lost for many years.

On of the drawbacks of concrete, despite its great compressive strength, is its lack of tensile strength. This is largely due to its natural porosity. Plain unreinforced concrete does not easily withstand stresses such as wind action, earthquakes, and vibrations and other bending forces and is therefore unsuitable in many structural applications. Low tensile strength also means low strength in bending or when used as a beam. Steel on the other hand has great tensile strength. The solution is to embed the steel into the concrete. This is usually achieved with the use of steel mesh reinforcement. The reinforcing steel, normally takes the form of rods, bars, or mesh. The reinforcement bars are often coined along the surface to give them a good connection to the concrete. The addition of tightly bound reinforcement bars makes the concrete section into a true composite beam. For this reason, the reinforcements must overlap.

Bending stresses are not normally a problem with garden paving when a properly prepared sub base has been created. Steel reinforcement will however, help to prevent cracks opening in the pavement.

For paving, the steel mesh should be placed about 30mm from the top surface. When reinforcement steel is placed too near the surface, it can corrode. Expansion results as steel is converted to iron oxide through corrosion. This expansion can crack the concrete surface. When the crack is caused by corroding steel, corrosion is typically visible at the slab surface. In the case of retaining walls, the wall is in effect a cantilever beam with the soil applying pressure to the wall. Steel reinforcement will help increase bending strength of the wall.

Modern concrete is now available with an enormous range of colours and textures. There are some available that can mimic the appearance of stone, but at a much lower cost to the landscaper. There are also some techniques by landscape architects to break up a large expanse of concrete by using alternating contrasting colours. 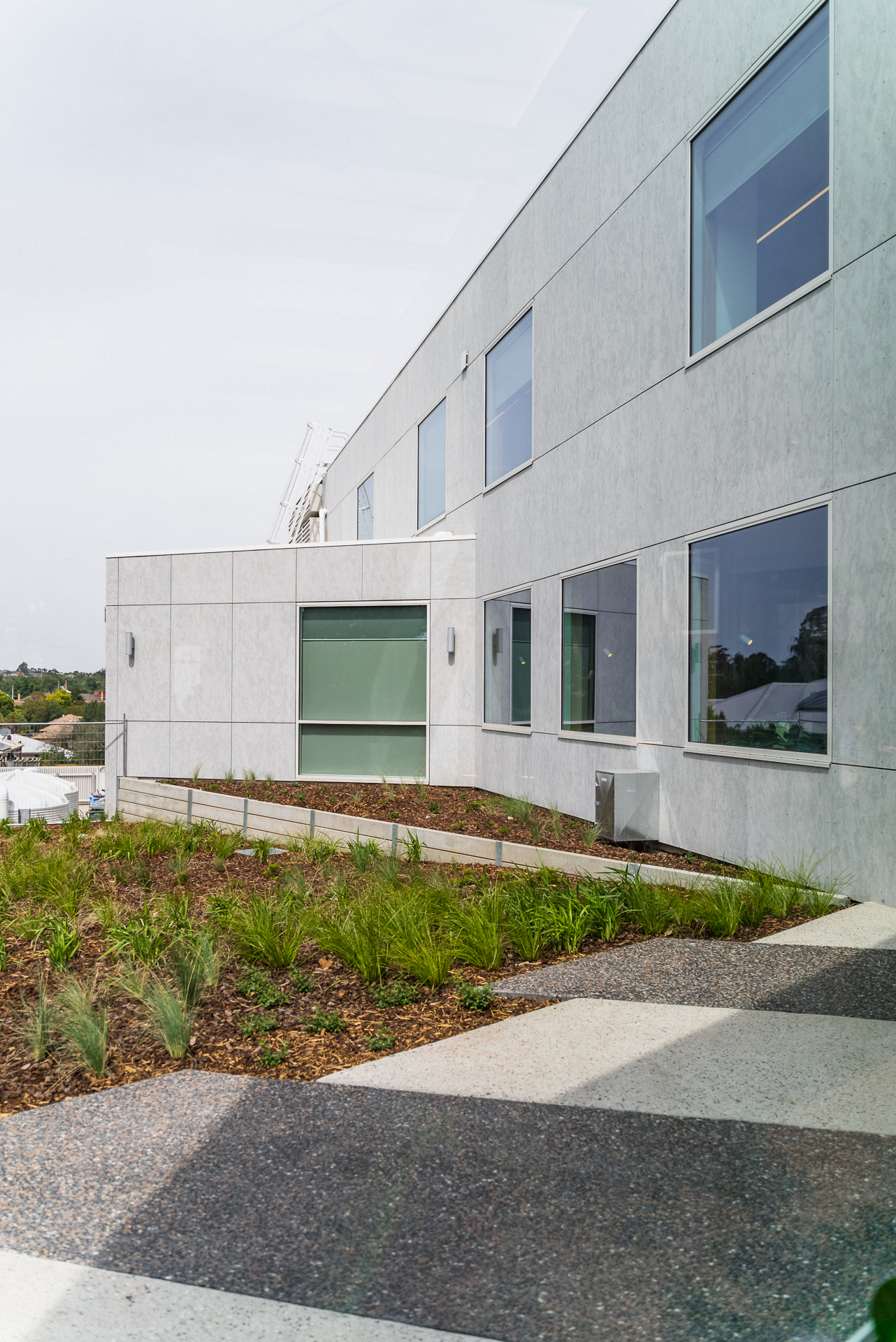 For help with the design  and development or your landscaping ideas, contact one of our experienced Landscape Gardeners.

We can help with small garden design all the way up to  Commercial Landscape design.

For more information on concrete